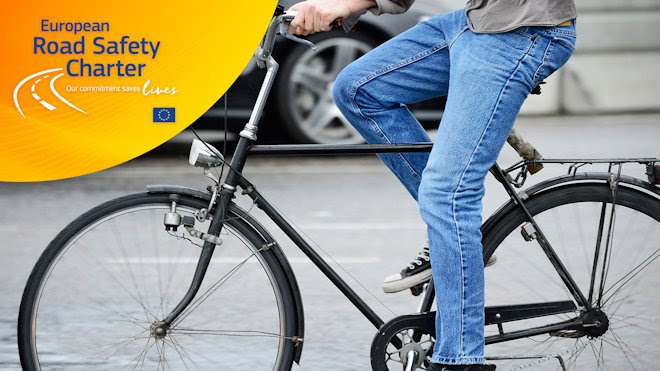 The European Road Safety Charter team in the July Newsletter focuses on the safety of bicycles, which are particularly vulnerable in traffic especially during summer.

As stated in the Newsletter:

As we enjoy the summer months it is important to highlight the latest road safety report from the European Commission, focusing on the safety of cyclists. Summer presents a seasonal peak for cycling fatalities and the latest thematic report from the Road Safety Observatory outlines important findings and recommendations as to why this is, and where improvements could be made.

Cyclists are particularly vulnerable in traffic and constitute the only road user group in the EU where the number of fatalities has not declined since 2010. Shockingly 1 in 10 recorded road deaths is a cyclist, rising to one in seven on urban roads. Reasons for the stagnation in the levels of cyclist fatalities might include the increased popularity of cycling or other factors such as the lack of safe cycling infrastructure.

Fatal cyclist crashes mostly involve motor vehicles. In 2019 in the EU this was the case in around 70 per cent of fatal crashes. Reliable EU-wide data on serious injuries is lacking, and it should be noted that bicycle crashes are significantly underreported, especially crashes without the involvement of motorised vehicles.

As with other crashes, cycling accidents are mostly caused by a combination of different crash factors. Infrastructural factors are critical and include the construction of separate bike lanes, ensuring road surfaces are skid resistant and free of potholes and introducing speed humps to reduce the speed of motor vehicles on intersections. Behavioural factors also play an important role: unsafe behaviour of both cyclists and other road users (e.g. speeding, distraction, red light running, and driving under the influence increases crash risk.

There are many initiatives across Europe working to improve road safety for cyclists but we can do more.